The second quarter century of Bemidji’s history was perhaps the most dynamic of any 25 years in the city’s development. Lumber had originally drawn people to the area, and sawmills continued to thrive, but the rough-and-tumble town of the late 1800s had matured to the point of being the north […]

The second quarter century of Bemidji’s history was perhaps the most dynamic of any 25 years in the city’s development. Lumber had originally drawn people to the area, and sawmills continued to thrive, but the rough-and-tumble town of the late 1800s had matured to the point of being the north central hub for railroads, bringing freight and passengers and taking huge loads of lumber away.

The 1920s brought men home from WWI, not all of them alive. In 1921, the body of Ralph Gracie, Bemidji’s first WWI casualty, was sent home for burial. Gracie had been flying with the American 17th Aero Squadron with the British Royal Air Force when his plane was shot down in August of 1918. His body, not recovered at the time, was later found, buried in a German cemetery, and was sent home. Bemidji’s American Legion Post was established in 1919 and named for Gracie.

Enrollment in Bemidji’s schools had grown quickly, school buildings filling faster than new schools could be built. Bemidji’s first high school graduates had completed their coursework at Central School. The first high school was built for $50,000 between America and Irvine Avenues and Sixth and Seventh Streets. It opened in 1910 but burned on Jan. 17, 1921. A new, impressive Bemidji High School was built on 15th Street — then the north edge of town — on property that had been part of the first county fairgrounds. It opened in September of 1922. In 1919, Minnesota’s sixth State Normal School had opened in Bemidji, and in 1921 it officially became Bemidji State Teachers College.

After Bemidji’s first high school was destroyed by fire in 1921, a new school was built on 15th Street — then the north edge of town — on property that had been part of the first county fairgrounds. It opened in September 1922. (Beltrami County Historical Society photo)

Prohibition had come early in Bemidji (December, 1914) with an1855 treaty ruling that forbade the selling of liquor in Indian territory. Saloons closed. (There were 27 listed in the 1914-15 City Directory, but other counts almost doubled that number.) With bars closed, people gathered in private homes to socialize. In the mid-1920s, after the Volstead Act made the entire country dry, improvements of highways through Bemidji allowed bootleggers and rum runners to pass through town.

In the Lakeland PBS television documentary “Bemidji: Between the Wars,” produced by the late Gary Burger, Buiford Qualle recalled “visitors” to his uncle’s garage, the People’s Oil Company, a place where travelers could park their cars overnight. Qualle described “big touring cars from Chicago, full of liquor. The drivers would pay my uncle or one of his men a good tip to take care of the cars,” which were headed for the West Coast.

Although saloons were closed, other businesses were just getting started. In 1920, Ira P. and Ira H. Batchelder, father and son, opened Bemidji Woolen Mills. In 1922, St. Anthony’s Hospital closed when the Benedictine sisters were reassigned to other places, but the Northern Minnesota Lutheran Hospital opened at the same site on Dewey Street later that year. Fires at planers and mills on Lake Bemidji foreshadowed the decline of the big lumber mills of Bemidji. On Nov. 8, 1924, a fire at Crookston Mill #1 destroyed 24 million board feet of select white pine. The lumber was valued at $750,000.

This aerial photo shows the Crookston Lumber Mill on the south shore of Lake Bemidji with Nymore in the foreground. (Beltrami County Historical Society photo)

The fire burned so hot that Midway Drive was shut down. Smoke and debris from the fire could be seen for miles, and people on the west side of the lake climbed on their roofs, trying to keep their homes from catching fire. The mill remained open until 1930, but then moved to Oregon, leaving hundreds of workers unemployed.

With a major employer no longer in town, and with the growing popularity of the automobile and improvements in the highway system, tourism became the focus, and not just for summer visitors, but year-round.

In October of 1929, the stock market crash sent the country into the Great Depression, but Bemidji was less affected than many parts of the U.S. In “Bemidji: Between the Wars,” Chet Swedmark (1922-2011) of Bemidji shared his memories of the Depression era days. “We never went hungry – we did a lot of berry picking. We didn’t have a nickel to buy anything but always ate well – lots of venison.”

Music and entertainment were still important. People hosted dances in their homes. The Kiddie’s Drum and Bugle Corps, made up of 5- to 13-year-olds, practiced weekly and traveled to perform in parades each weekend in the summer all across the state and even in Wisconsin and Canada. Fundraising support from the Legion and its auxiliary provided travel and uniforms.

Meanwhile, Bemidji’s efforts to promote itself as a vacation destination included some major undertakings with the building of the Fireplace of States, a Civil Works Administration project. District Manager of the State Re-employment Office, Harry Roese, invited representatives from all 48 states, all National Parks, every county in Minnesota, and all Canadian provinces to send rocks and stones to Bemidji for a “Fireplace of States,” a unique structure that he hoped would draw visitors to Bemidji.

Charles Budge, a local architect, drew plans for the fireplace and for the building that would house it. Mark Morse, a local mason, who had recently built a rock fireplace on the college campus on the lake, created the Fireplace of States in 1934. It was built into an octagonal log cabin on Bemidji Avenue on the lake end of Third Street and now can be seen inside the Tourist Information Center.

Bemidji had been a summer destination since its early days, but the growing popularity of the automobile and construction of improved roads brought more and more visitors to town.

An aerial view of the Lake Bemidji waterfront shows the Paul Bunyan and Babe the Blue Ox statues between the Third Street dock and the armory. (Photo courtesy Jim Aakhus)

In 1932, Bemidji held its first Winter Carnival, complete with an impressive ice castle near the armory by the lake. The 1937 Winter Carnival featured several days of sports and activities and the unveiling of Bemidji’s icon – Paul Bunyan. Babe, first built to ride atop a 1½-ton truck, led the parades and made appearances at other parades around the state, including St. Paul’s Winter Carnival. An estimated 10,000 people attended Bemidji’s 1937 Carnival.

Before it was placed next to the Paul Bunyan statue, Babe the Blue Ox made appearances in parades on a truck, with the vehicle’s exhaust exiting through Babe’s nostrils. (Beltrami County Historical Society photo)

As the 1940s dawned, the Works Program Administration had contributed to much work around the lake in the mid- to late 1930s, including Lake Bemidji State Park, continued until the U.S. became involved in WWII. Like the rest of the country, Bemidji was moving forward when the threat of war interfered with plans. On Dec. 20, 1941, five train cars full of materials for rural electrification were unloaded in Bemidji and were stored and assembled at the county fairgrounds. Soon afterward, rural Bemidji had electricity.

On Jan. 9, 1942, the Bemidji Pioneer reported that 248 Beltrami County men were already in the service and a second group would soon be inducted. A third group would leave for pre-induction physicals at Fort Snelling shortly. In a column by local historian Art Lee in the Dec. 22, 1978 Bemidji Pioneer, Lee pointed out the manpower shortage in Bemidji as well as a shortage of college students, which had begun in the 1930s with the Depression. In 1944, just 123 students were enrolled at Bemidji State College. Finally, the war against Germany ended on May 8, 1945, but Japan did not surrender until Aug. 14, and Bemidji veterans started to return.

UP NEXT: Like the rest of America, Bemidji experienced growth after WWII

Thu Jun 10 , 2021
Vancouver’s Stephen Ames won the Principal Charity Classic on Sunday for his second PGA Tour Champions title, taking advantage of Tim Herron’s final-round collapse. Seven strokes behind Herron entering the round, Ames shot a 5-under 67 for a one-stroke victory over fellow Canadian Mike Weir. “Everybody else kind of faltered coming […] 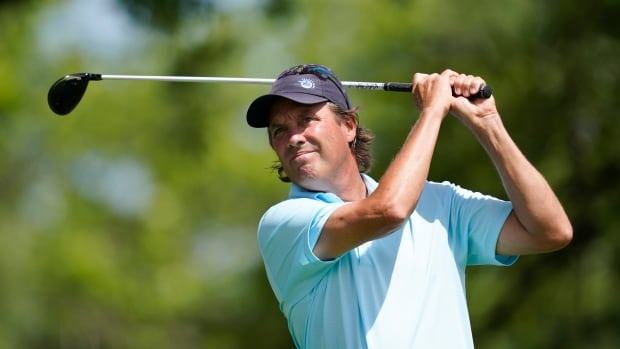